Hi folks, I’m going to show you my method to make a card’s meaning clear. If you lay down a card and don’t realise immediately what it means in this case, or you realise that a card can have two or more meanings, you can use my clarification method.

It’s simple — you should add two cards to the central card. One of them means «it is not this» and the other one means «it is that». Basically, I place the first one on the left side of the card I need to clarify and the second on the right side. So, I get three cards set like on the picture. 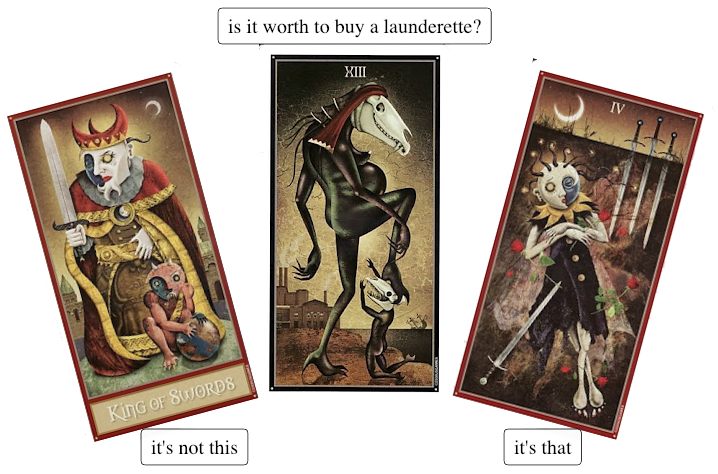 Look at the sample! It is a rapid assessment of profit which is expected from the purchase of a laundrette. «Is it worth it to buy it?» — asks my client.

The central card is Death. It is Major Arcanum which represents the end. Typically, it tells us that something is finishing or must be finished. In general, this meaning is terrible, frustrating and upsetting for people. Therefore some tarologists prefer to consider Death in terms of transformation. Usually, it sounds like «something ends but then something else begins» shifting a focus onto the beginning. It works in psychological cases but doesn’t work in cases about material, concrete things. In connection with the laundrette, Death points out the fact that my client’s purchase would not succeed and would not get money.

To clarify why it would be such an unsuccessful venture I draw two additional cards:
«it is not this» — King of Swords
«it is that» — Four of Swords
In terms of business, King of Swords shows management, control and administration; to plan strategically and to supervise a process. In this position, the card means that nobody would run the laundrette properly. On the contrary, a proprietor is going to do nothing as if the laundrette is supposed to work by itself. The Four of Sword confirms it.

Curiously that this particular Death, of the Deviant Moon Tarot deck, is killing her own child by her own hands, or rather by her feet. It seemed to me the card portrays people who ruin their projects themselves.